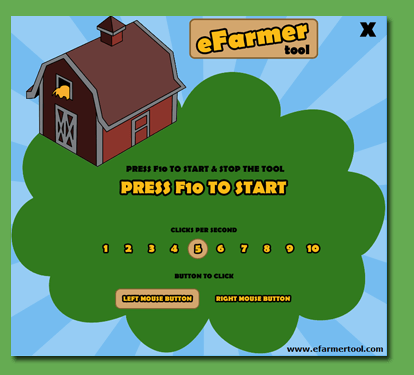 Compatible with the games above and many, many more!

After the virus's being found and having experience playing Facebook games, I had the idea for The eFarmer Tool. I wanted to develop an auto clicker that was safe for players, was easier to use, was portable, had a nice interface, took care of all the clicking and offered users quick and efficient support if they needed it, which are all things other auto clickers lack.

The eFarmer Tool has grown to include a version for Windows and for Mac, it's own YouTube channel showcasing the tool in use, a Twitter account, a Facebook fan page and also an eFarmer Tool user account for becoming neighbours in games.

Overview of The eFarmer Tool

Set how many clicks you require per second, which mouse button to click and then press the shortcut keys on your keyboard to activate the clicking. All you have to do is move your cursor around the screen and the work is done automatically! Up to 50x the speed and efficiency! No more tired finger!

The eFarmer Tool is now available for Windows and Mac!

A list of games that the eFarmer Tool makes even more fun to play!